Bolender’s Horse Park in Silver Creek is the birthplace of Checkers and of an exciting,  worldwide sport called Mountain Trail.

“It’s a practical discipline,” says Bolender. “The horses have to learn to go over bridges that roll and swing because we actually in the Pacific Northwest have quite a few of those obstacles. 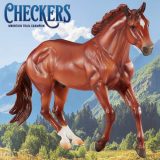 Bolender and Checkers have been teammates since 2006. They won the overall High Point and national championship titles in 2008, 2009, and 2010.

“There’s nothing that Mark could ask Checkers to do that he wouldn’t do,” says Lee Bolender. “He trusts him that much.”

The trust is mutual. Bolender doesn’t use a bridle to control Checkers. That’s a little like driving a car without a steering wheel.

“Like some things they say on TV, don’t try this at home,” laughs Mark Bolender.

“It’s just a big sign of trust between the two of us. He has an option whether or not he… click to continue reading.