Have You Seen This Women or Horses?

December 10, 2019 – The King County Sheriff’s Office has indicated they are looking for any horses in our area that are owned by Sharon Hunter or Hunter’s Wind Wild Horse Rescue. Yesterday, a judge in Snohomish

County ordered Sharon to give up all her horses in the next five days, and while she claimed in court to have only one.  Sharon has a history of having horses in different locations.

If you have any information about the location of any of Sharon’s horses, you’re asked to contact Animal Control in the county where the horses reside and the King County Sheriff.
Shown below are two news stories and an update from S.A.F.E. (assisting with temporary housing and placement of the horses) that will provide additional details about Sharon and the horses impacted by her actions.
December 10, 2019 story was shared by K5 News.

ENUMCLAW, Wash. — Two dozen horses abandoned on a property in Enumclaw with no food or shelter were rescued over the weekend by King County Sheriff deputies and several volunteer organizations.

The owner of the property in the 38300 block of 324 Place S.E. called SAFE Horse Rescue on Dec. 2 to report that a woman contacted him in August to see if she could borrow some of his land to house the horses until she found a permanent solution.

He let her borrow the land thinking it would be just for a few weeks, but over the course of several months reports started coming into Save A Forgotten Equine (SAFE) Horse Rescue saying the animals were not being fed and had been left on the property, according to King County Sheriff officials.

SAFE contacted the King County Sheriff’s office and detectives immediately got to work.

On Dec. 7, detectives served a search warrant on the property. The 25 horses were removed by SAFE and will eventually be available to the public for adoption.

The owner of the horses was identified by law enforcement as Sharon Hunter, 61.

She had an outstanding warrant for her arrest out of Snohomish County for animal cruelty, according to King County officials. She appeared in Snohomish County Monday, and was ordered not to board horses.

She said the horses on the Enumclaw property were being fed only every few days, and the herd was out-competing older and ill animals for food, causing them to decline faster.

“And so they had eaten the bark off trees, eaten every bit of grass on the property and turned it to mud,” she said. “They were all standing in about ankle deep mud, and urine and feces.”

“The woman that’s taking in these horses considers herself a rescuer, and I think at some level she does believe she’s doing good,” said Hammond. “She has saved these horses from going to slaughter. But the problem is she does not have the resources, or the land, or even the ability to care for the number of horses that she’s taken in.”

The King County case involving the horses remains an open and active investigation. No charges have – Click to continue reading.

September 13, 2019 story was printed in the SeattleWeekly.

No one really knows how many horses Sharon Hunter has. Hunter, who owns and operates the Hunters Wind Wild Horse Rescue, had as many as 120 horses in two separate herds at one time. She stowed them on properties in Puget Sound counties.

Hunter’s Redmond-based nonprofit was founded in 2015, with just more than a dozen rescued horses from the Yakama Nation reservation in Eastern Washington. Since then, several of her horses have been seized by authorities alleging neglect in three counties, and in two counties horses have been euthanized. Horse advocates believe she may have more.

The nonprofit’s impact can be felt beyond the mossy pastures of King, Snohomish and Pierce counties. It stretches across the country to horse rescues in the Louisiana flatlands and in the dusty kill pens of Texas — the last stop for unwanted horses before slaughter.

Whether Hunter’s nonprofit is a net positive depends on who you ask.

(When contacted by phone for this story, Hunter hung up. She did not answer a follow-up phone call and an email received no reply. The civil attorney representing Hunter has not returned a request for comment as of the Reporter’s deadline.)

One of Hunter’s herds, located in King County, is fed a batch of hay. Horses, like these, are being housed on properties in numerous counties. Landowners allege that their owner hasn’t provided enough food or medical attention. Ashley Hiruko/staff photo

Hunter originally appeared in pages of the Redmond Reporter in 2015, when she started rescuing horses with her daughter Brandelyn and her son-in-law Joe Tafoya. Hunter’s family had been rescuing horses for about two decades and in 2015, Hunter took in 13 wild horses from the Yakama Nation reservation.

Before they were rescued, the horses were slated to be shipped abroad — either to Canada or Mexico — and slaughtered for their meat, Hunter said. And the conditions the horses faced in the industry’s kill pens were horrific. While Hunter was originally planning to take in two horses, she ended up rescuing 13.

The horses arrived in generally poor shape, and the family said they provided medical care. Two mares arrived pregnant, but one of the colts didn’t survive. It had been born with too many health problems, Hunter said.

Hunter’s plan at the time was to rescue, rehabilitate and release the horses. She said she was working on securing a 14,000-acre plot of land in Oregon for a horse sanctuary. Joe Tafoya was trying to get Washington state to permanently end horse slaughter and close the kill pen industry pipelines.

But at some point in the last four years, the relationship between the Tafoyas and Hunter soured and the herd multiplied. Joe Tafoya said he and his wife no longer have regular contact with Hunter.

“My wife and I continue to rescue horses on our own privately. When [the Reporter published] the article, Sharon had actually just brought those 13 horses on my property and we were trying to get involved to help. Shortly after, we figured out that we wouldn’t be able to help or work with her,” Joe Tafoya said in an email.

By 2019, Hunter’s herd had swelled in size to at least 120, with known herds at a spot in Snohomish County and one in Auburn. Another was in Fall City this summer, before being relocated to Enumclaw. At least one cluster was in Pierce County. Court documents from King and Snohomish counties indicate that several of the horses also were purchased from kill pens before they could be slaughtered abroad.

Far from the Pacific Northwest, Angels Grove Ranch sits in the wooded southeast of Louisiana — about an hour’s drive north of New Orleans, across the Lake Pontchartrain Causeway. Court documents show that Hunter had boarded 10 horses with Lisa Massimini’s Angels Grove Ranch and Horse Rescue.

Massimini said horses she boarded, belonging to Hunter, were brought over by someone previously boarding them in Texas.

An investigation report from King County stated that a detective contacted Massimini, who said Hunter had made a down payment for boarding and care of the horses in August 2017. Between that time and the end of January 2018, she said she hadn’t received any additional payments during the five months of care. Eventually, Hunter paid the boarding fees and the horses were picked up by a hauler from her Louisiana ranch.

“I don’t really know where they went after me,” Massimini said.

Several of Hunter’s horses originally came from the south, and in particular Louisiana and Texas. Both states have – Click to continue reading.

August 27, 2019 update about seizure of the Fall City Forty.

We’ve had to stay pretty quiet about the situation with the Fall City Forty for two reasons. One, because we were being threatened with legal action for our involvement in this rescue mission; and two, because we were holding out hope that we would be allowed to return to the Fall City property and continue caring for these horses. We feel it’s time to let our community know what happened, and what is continuing to happen.

First, some background. The horses we called the Fall City Forty were wild horses, originally rescued from Yakima. There were between 14 and 23 horses in the original herd, but because stallions and mares were turned out together and allowed to breed freely, the herd grew in size to the 40 that we encountered last June. While the owners of the Fall City property had originally agreed to let some horses live there temporarily, the situation had grown well out of hand: horses not being fed, not receiving vet or farrier care, not being gentled, handled, or trained, not being adopted to new homes. These horses were just being stockpiled, and all the while their owner was collecting more and more horses from auctions and feedlots. 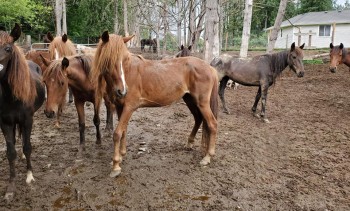 On behalf of the property owners, SAFE came in and began working with the horses. We had tons of hay delivered to the property so the horses could be fed 2-3 times per day. We photographed and cataloged the herd, and put the word out that we were looking for people who had experience with unhandled horses who might be willing to adopt them. And we began taking first steps toward gentling these wild animals and helping them become accustomed to being around humans.

Public support for this rescue effort was tremendous. Over 350 people made donations to help these horses and we received adoption applications from more than 40 people. We carefully selected those that that had prior experience working with wild, unhandled horses, and who had the resources necessary to provide regular and sufficient feed, veterinary and farrier care, and training. We conducted phone interviews with candidates to learn more about them and pair them with suitable horses from the herd. We did reference checks with veterinarians, trainers, and personal references. And we evaluated the suitability of new homes with photos and videos taken on site.

The next week, with the help a wonderful group of horsemen and women, we began preparing these horse – Click to continue reading.