As most of us that live on the West Coast of the US are all too painfully aware, September was a horrendous month of wildfires all up and down the coast—from Washington, down through California. Over 500,000 people in Oregon alone were evacuated, thousands of homes burned to the ground, businesses lost, and ( so far ) at least 33 people have been killed. The places that weren’t actively burning, were covered in a dense shroud of smoke for over a week as it moved up the coast.

I ran across this photo taken by Charlotte H., who lives in the greater Portland area, of her view from the evacuation site she and her 29 year-old horse, Wonder, stayed at for eight days and she was gracious enough to allow me to share her photos and story. These wildfires have sadly become a regular occurrence along with climate change and something we can no longer ignore as a fluke. Charlotte and I hope her story helps others to be more prepared for such an event. 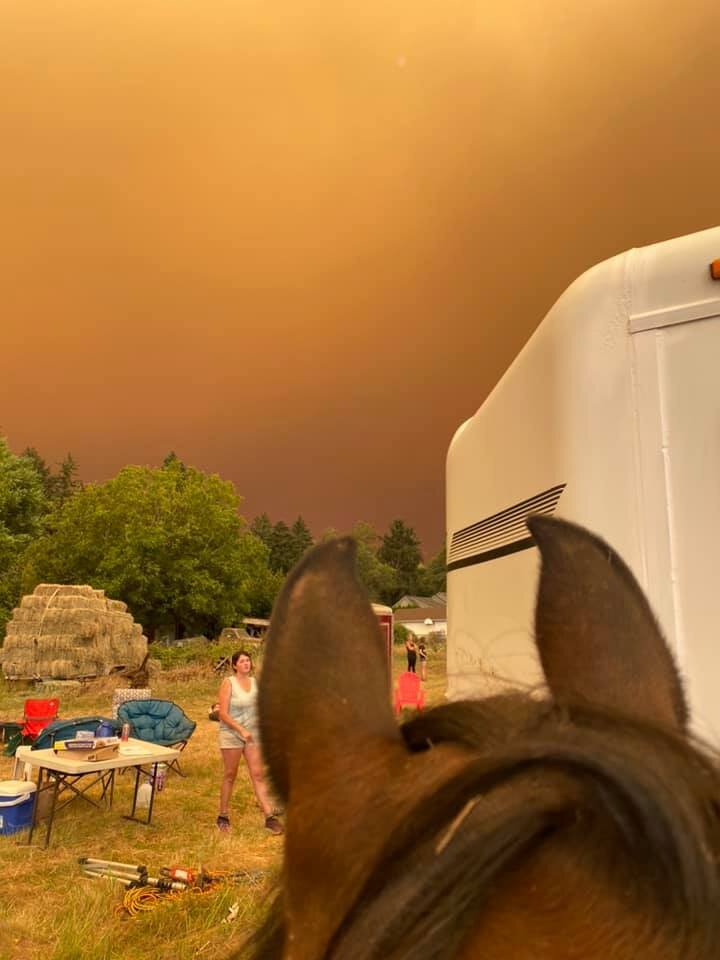 Charlotte and her horse, Wonder, at evacuation site in West Linn, Oregon.

How did you first hear that you were going to have to evacuate? ( social media? tv? text alert from emergency group? friends? neighbors? )

I first heard about the evacuation from the owner of the ranch where I board my horse. She said we needed to be prepared and to get on out there to help do so. I have a trailer and a means to tow it, so dropped everything I was doing and went out immediately. I had to cancel sessions in the middle of my work day which I’ve never done, but one does not hesitate in a situation like this.

How much warning did you have before you had to load your horse and drive away?

I wonder about that. Time was different when it was happening. From the first notice to realizing we needed to get out of there, it was a matter of hours. It was daytime when I drove out there, and the sky was the darkest gray you can imagine with plumes of smoke looming. We were between two fires which became most apparent when it got dark, as the sky glowed orange as ash was falling around us. That was when there was no question to load up and leave. We also were seeing trailer after trailer being towed out on the road, and the occasional fire chief truck flying by. That was also when things got really scary. We’d already moved the horses from the trees to the metal barn, but within an hour, we felt it best to evacuate. We had about 15 horses to load. Two had been brought in from another area to us previously.